Seeking ways to be more productive? Curious how technology can impact your jobsite? Caterpillar application, equipment and technology experts are available to answer your questions.

ASK YOUR QUESTION
This site uses and sets "cookies" on your computer to help make this website better by keeping the site reliable and secure, personalizing content and ads, providing social media features, and analyzing how the site is used. You can learn more about these cookies by clicking here. By clicking 'I Accept', you are agreeing to our use of cookies.
I ACCEPT
I DECLINE

ASK A CAT® EXPERT: COULD TODAY’S ENGINEERS BUILD A ROBOT AS COMPLEX AS OPTIMUS PRIME?

The answer to this question is complex. Consider first that engineers and scientists have just scratched the surface of the potential of robots and artificial intelligence here on Earth. For example, in 2014, a joint venture (Brave Robotics, Asratec Corp. and original Transformer creator Tomy Co. Ltd.) launched their autobot, J-deite. The bipedal robot converts into a sports car, however, it is only three feet long and is too small for a driver. And, it is light years away from the capabilities of Optimus Prime. To get a better understanding of the complexities involved, we asked one of our engineers to explain just how big the engineering challenges would be when building a robot with the capabilities of Optimus Prime.
Brian Stelbrink, a Caterpillar Excavator Specialist, wanted to make sure that we truly understood the challenge: engineer a complete tractor-trailer truck that could convert into a full-motion bipedal robot that can, among other talents, think, talk and fight. No small challenge…because size matters. Brian explains:

“In engineering and manufacturing, when you increase the size of the components, you increase complexity and cost. At Caterpillar, we design and manufacture the largest heavy equipment in the world, so I can confidently tell you that a real robot the size of Optimus Prime would take a lot of number crunching and testing – and it would all add up to being very costly.”

We assured Brian that in the land of “what if” we spare no expense, then asked him what challenges he would tackle first.

“In the vehicle state, Optimus Prime is an on-highway truck that weighs about 40 tons. The truck has an engine that runs on diesel fuel that turns the axles and drives the wheels – a reasonably efficient use of energy and mechanical horsepower.  But doing what Optimus Prime does—walking, jumping, running—we would need an immense power source to provide that type of movement of that much weight. And, we don’t have an Allspark as an option.

“In addition to mechanical horsepower (i.e. what powers a truck), there are three common ways to achieve the force required to move iron—pneumatic, electric or hydraulic. Hydraulic power makes the most sense here because it delivers the highest power-to-weight ratio. Caterpillar builds the largest line of hydraulic excavators in the world—and we are constantly optimizing hydraulic systems to provide more digging, lifting and “moving” power.

“For comparison, if we take a Cat® 336 Excavator which also weighs nearly 40 tons, we can think of the boom, stick and bucket as moving parts like Optimus Prime’s legs and feet. By comparing the two, we can get a sense for how much hydraulic pressure might be needed to get movement from an Optimus Prime-sized robot leg. 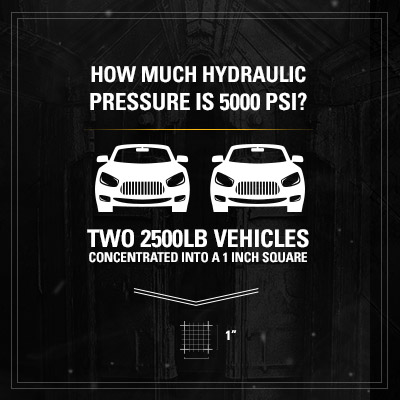 “Leg movement would likely require over 5000 pounds per square inch. How much pressure is that? Imagine two cars, each about 2500 pounds, one on top of the other, being concentrated into a one inch by one inch square.

“But even if we have an idea of how much hydraulic pressure and flow are needed to move all that weight, we would need a very large hydraulic tank and massive amounts of tubes and wires to reach all those key moving parts of Optimus Prime’s 28-foot-tall frame.  Working around all of that is going to create some real challenges during the conversion back to a truck.  Further, Optimus Prime seems to keep many of his ‘tools’ in hidden compartments.  I’d say we’d have our work cut out for us.”

Get profitable insights with Technology Updates from Caterpillar every month!

Thanks for taking an interest in Technology Updates from Caterpillar.

An email confirmation is on its way to your inbox!

You are Entered to Win

$5,000 in rental credit could be yours! Look for helpful tips about maximizing the potential of rental equipment and machine technologies in your inbox soon. To manage subscription preferences, including to stop receiving future marketing communications from Caterpillar, click here. Caterpillar will continue to send service/transactional messages, including those pertaining to existing accounts, even if you opt out of marketing communications.